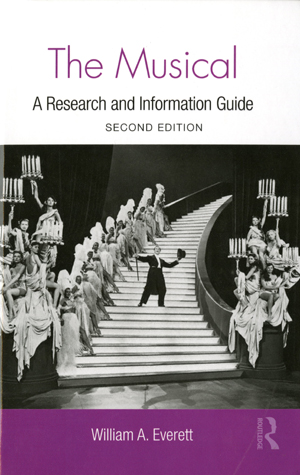 William A. Everett’s The Musical: A Research and Information Guide (2011), 2nd edition, is a bibliography that focuses primarily upon the history, creators, performers, and the production of American musical theatre from the late nineteenth century to the present day.  It contains 1,474 items such as reference works, websites, articles from both scholarly and popular periodicals, recorded anthologies, essays, and dissertations and theses. Within his definition of ‘musical,’ Everett includes filmed and television musicals alongside the more traditional stage musicals, both mega-musical and obscure.  Although the focus is predominantly American musical theatre, a few small sections also address European musicals, French operetta, and Bollywood.  The broad majority of citations include annotations, as well as ISBN and Library of Congress call numbers when appropriate. Excluded from coverage are anthologies of “greatest hits,” cast and studio albums, soundtracks, and solo albums with a Broadway or Hollywood theme. As with all print publications citing websites, these items have the potential to disappear; however, the internet resources Everett chose to include are all reliable, popular reference sites that are unlikely to disappear from the Internet or change domains anytime soon. Students performing research on musical theatre will find this volume useful, as will those interested in expanding their knowledge on the subject. 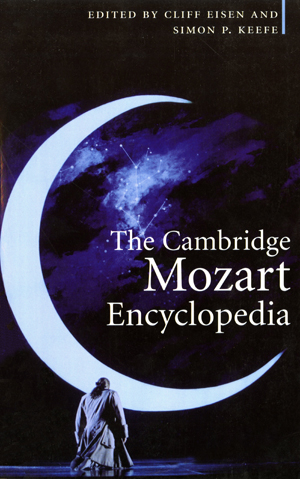 Edited by Cliff Eisen and Simon P. Keefe, the Cambridge Mozart Encyclopedia (2006) is an excellent reference work that not only encapsulates current academic thought about Mozart, but also offers a guide to understanding the composer and his world through over 500 entries addressing a variety of topics such as people, musical works, places, genres, and society. Entries can range in length from a large paragraph to long, meaty essays. Five useful appendices conclude the work such as a complete workslist, a collection of theatrical biopics about Mozart, a selective list of his operas on DVD and video, a directory of Mozart organizations, and a list of useful Mozart websites. Extremely up to date, this book contains topics and subjects which have never before been addressed in English-speaking scholarship, and is recommended for students, scholars, and layman audiences.