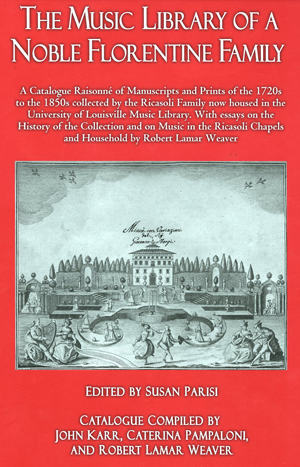 A result of the collaborative of efforts of Robert Lamar Weaver, John Karr, and Caterina Pampaloni, edited by Susan Parisi The Music Library of a Noble Florentine Family (2012) is a catalogue raisonné of the Ricasoli Collection acquired by the University of Louisville in 1989, which consists of music and pedagogical books collected by the Ricasoli family during the eighteenth and nineteenth centuries. This particular catalogue builds upon the work of nineteenth-century inventories already completed for this collection; therefore, while the majority of the collection is housed at the University of Louisville, the catalogue will occasionally items not in the University’s possession either because they’re been lost or separated from the collection as a result of private sales before the acquisition.

Beyond the catalogue itself, this reference work includes a bibliography and two essays by Robert Lamar Weaver: “The Ricasoli Collection: Its History and Cultural Background” and “Music in the Chapels and Household, 1777-1850: Evidence from the Ricasoli Archives.”  These essays are extremely helpful in understanding the content and archival history of the collection and its numerous inventories, which sheds light on some of the idiosyncrasies of this catalogue’s organization. From a historical perspective, they also paint an interesting picture of the collection’s function for the family. The main body begins with a useful chapter describing the catalogue’s organization, then divides entries into three sections: Secular Music; Sacred Music; and Method, Theory and History Books. A broad variety of information is provided in the entries, most notably: catalogue numbers from earlier inventories if known; sales catalogue numbers for items sold to private buyers; microfilm number corresponding to holdings at the University of Louisville; RISM numbers; advertisements in nineteenth-century periodicals; references in Ricasoli family papers to composers and events; and musical incipits. All entries are numbered according to the 1879 collection inventory. Scattered throughout the pages are 27 black-and-white reproductions of engravings, title pages, and front covers.