The Dictionnaire Chronologique de l’opéra de 1597 à nos jours was translated from Italian into French by Sophie Gherardi.  Aimed at a general audience of opera enthusiasts, this dictionary  provides a guide to operas in the standard Western repertory dating from 1579 through 1994.  It begins with a short preface by the Swiss composer and music administrator, Rolf Liebermann.  Following that, users can find basic information on each of the included operas, such as the title, the date of the first performance, the author of the libretto, the genre, the number of acts, and the premier information.  Additionally, entries also describe the main characters and their vocal parts, and provide a brief plot of the performance, the composer’s life, musical aspects of the work.  The simplicity of the layout and information makes it a perfect resource on hand for anyone interested in operas. 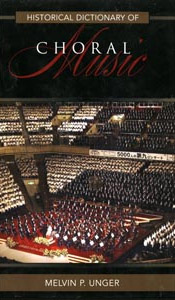 The Historical Dictionary of Choral Music by Melvin P. Unger embraces all things choral, including over 1,000 entries about composers, genres, conductors, institutions, styles, and other general choral music terminology. Coverage extends to choral music from Europe and the United States, focusing on composers with the most significant contributions to the world of choral music. A written explanation of the history of choral music and a chronology of key events that contributed to its development precede the dictionary proper. Intended for all who wish to learn more about choral music from the layperson to the professional.

As might be gathered from the title, Robert Letellier’s Opéra-Comique: A Sourcebook is a handbook of the opéra-comique genre as it developed in Paris from 1762 to 1915.  The book itself chiefly consists of a chronology listing all known works premiered specifically at the Opéra-Comique and a separate index which lists these works by composer.  Though author focuses primarily upon the single theatrical entity known as the Opéra-Comique (which occupied various buildings throughout the nineteenth century), the index’s works lists also include operas premiered by other rivaling theatrical companies such as the Théâtre-Lyrique, because these operas substantially contributed to the development of opéra-comique as a genre and provide a fuller understanding of a composer’s participation its evolution.

This handbook provides ready access to basic facts about a given work: the form, number of acts, librettists, the date and theatre of the premiere, and frequently a descriptive analysis. Users thumbing through the concluding, cross-referenced indexes can also access this information by the names of the librettists or singers who performed the roles, among other ways.  Additionally, individuals new to the occasionally complicated history of nineteenth-century Parisian opera will benefit from Letellier’s relevant introduction on the subject, making this book appropriate for both music students and advanced researchers alike.